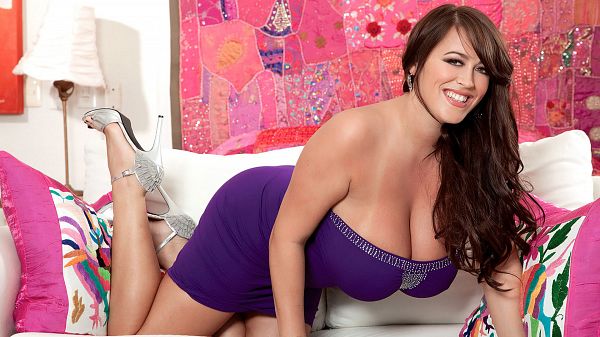 In "Bird Watching," shot in Mexico, the incredibly built Leanne Crow looks out over the resort city of Puerto Vallarta from the hilltop swanky mansion that SCORE used as its headquarters.

The view is majestic but not nearly as majestic as Leanne in a tight dress. No one below can see what Leanne is about to do. And that's a good thing. If they could, they'd be pulling out their telescopes. Today, they'd probably fly a few camera-equipped drones to spy on her.

Leanne was in Mexico for On Location Puerto Vallarta. Her companions for this DVD and SCORELAND special were Jenna Valentine, Natalie Fiore, Micky Bells and Hitomi. That's a lotta all-natural breast-power in one place!

Leanne's other SCORE adventure brought her to St. Maarten for Leanne's Stacked Summer. Michelle Bond, Angela White, Maggie Green and Charley Green were on board for that on-location shoot.

"I used to tell my mom all the time that if I didn't have boobs by the time prom came around, that I was not going," Leanne said about her boob beginnings. "I always envisioned myself in a long dress with cleavage at my prom. Then, a few months before my prom, I went from nothing to a C-cup. They just sprung out, and all of a sudden, I had boobs. My prayers were answered. They grew almost instantly from a C-cup. They just kept growing and growing and growing. And then I went to get measured and they were like, 'You are an F-cup.' And I was in shock. I was buying C-cup bras and I was an F-cup! I was busting out of my bras, but I thought I was, like, a D-cup. But it was because at that point, I didn't understand cup sizes. I was only around 17 at the time."

The first time I saw Leanne's photos was on a British site for amateur models and I thought she was literally breast royalty, a name I later used for the title of her first set for SCORELAND. Leanne has never taken her bottoms off to this day. With tits like hers, it doesn't matter to me and to a lot of other guys.