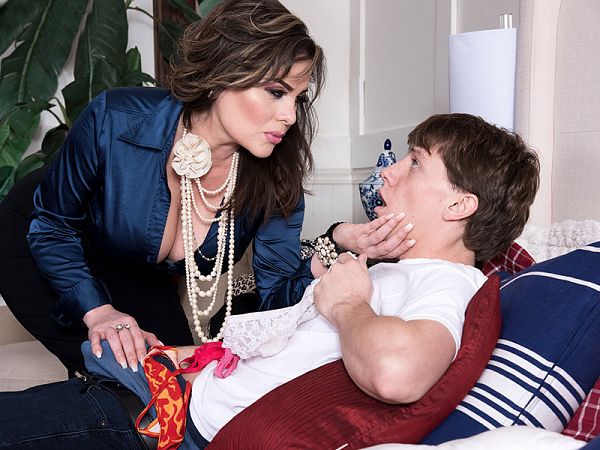 Ciara Ryder, a 43-year-old divorcee and mother of two, is all dressed up and ready to go to work when she checks in on her son, who's supposed to be studying with his best friend. The friend, Ryan, tells Ms. Ryder that her son had to step out, and Ciara tells him to make himself at home.

Which he does. He sneaks into her bedroom, opens her drawer, takes out her panties and starts sniffing them. He sniffs her bras, too, because they've been touching Ms. Ryder's big tits. He jacks his cock while sniffing Ms. Ryder's panties.

And that's when Ciara walks in.

"Ryan, what are you doing in here?" Ciara says, shocked, a little interested. Maybe a little more than interested.

"I wasn't doing anything," he says, stammering, trying to stuff his cock back into his shorts.

And that's when Ryan's day takes a turn for the best. Ciara decides she'd rather fuck than go to work, so she takes off her clothes and has young Ryan eat her shaved pussy. Then she sucks his cock, then he fucks her pussy every which way until he can't hold back any longer and empties his balls in her mouth.

And, no, her kids don't know she's here.