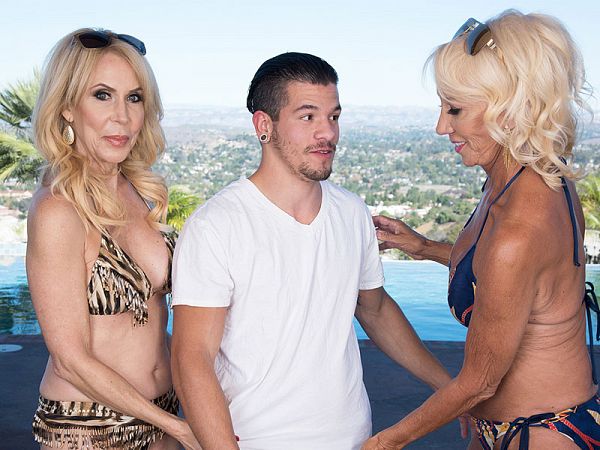 Madison, who's 5'10" tall and married, told us, "My husband had shot pictures of me before. The first time, he strapped me down on the bed, which was my first time being tied up, with Velcro straps, and he blindfolded me and started tickling me with a feather and touching me with different things, like ice cubes, and I was going crazy. Pinching me with little clothes pins. That went on for about 40 minutes, and when he took the blindfold off, I saw that he had been filming.

"He goes to your websites all the time. He especially likes 50PlusMILFs,com and 60PlusMILFs.com. He calls me a super GILF. He got me interested in all this and said, 'I can make this happen.'"

He did, although Madison's the one who really makes things happen.

We asked Erica, "You like the idea that there are 20-year-old guys out there watching you and jacking off, don't you?"

And she said, "Oh, yes, and how many 60-year-old women can say that? So if you're a woman out there who's thinking about it, you're never too old and it's never too late, and you can be confident and rock your sexual side."

And rock our worlds while you're at it.