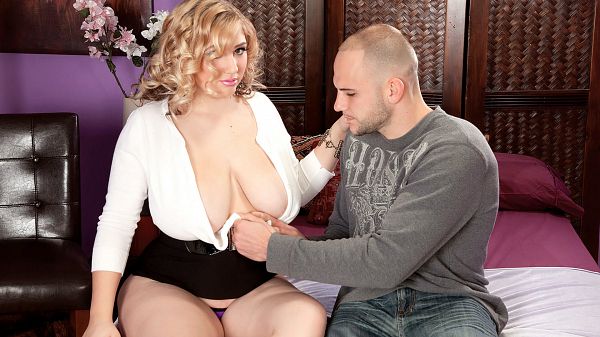 Filmed before she got knocked-up and retired after giving birth (we filmed her pregnant in solo and hardcore), Shyla Shy talks to SCORE's studio manager about her bod and boobs. Shyla is at her peak here. JMac arrives after their chat, and is he ever happy to pound her senseless.

"I wanted to do it a long time ago, but I wasn't old enough," Shyla told a V-mag editor. "The sex is great, and the money is, too. I know there's good money to be made, and Iâ€ˆhave no problem with getting naked in front of the camera. I've actually wanted to do regular modeling, not porn. But since that didn't happen, I decided to do this, which is great, too. I'd go on calls, and they'd tell me I wasn't tall enough, or my boobs were too big, or I don't weigh the right amount. I was supposed to do another video the other night before I came here, for a modeling company. I told them I was 170 pounds, and he said, 'Send me a picture.' So I did, and he said no. He said I wasn't skinny enough."

We would thank that agent if we knew who he was.

Shyla will always be one of the great V-Mag girls-next-door. She really was a living sex doll.