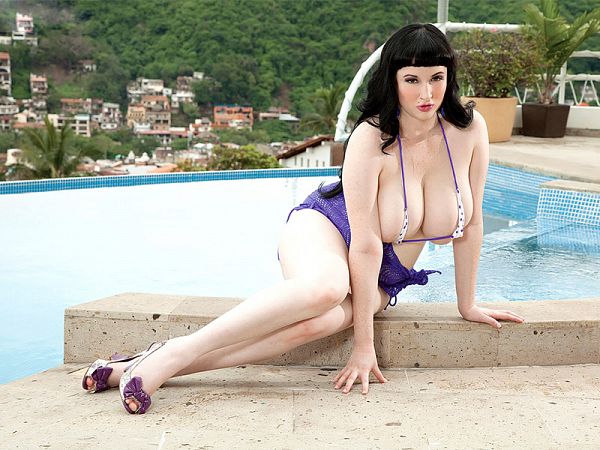 Jenna Valentine's first shoot for SCORE took place in Miami. A few months later, she was on Grand Bahama Island with Karla James, Arianna Sinn, Taylor Steele and Natalie Fiore. A United Nations of big-titted girls. More than a year later, Jenna was in Puerto Vallarta, Mexico with Leanne Crow, Hitomi, Micky Bells and Natalie Fiore. That's where this bikini shoot was filmed. Jenna and her 36HH-cups do this polka-dot bikini justice.

Jenna talked about some of the girls the last time she was at SCORE.

"I talk to Leanne on Facebook and Twitter. I really love Hitomi. She's like a real-life Hello Kitty. She's so cute. It's like she's not real. I think it's her broken English. And she always says she wants to shoot with me. I missed her in Mexico. And I talk with Arianna Sinn sometimes although she's not on social media that much. She's so sweet."

I like Jenna's Addams Family sense of humor. It's dry and funny-weird. I don't know any other SCORE or V-mag Girl with her style. This excerpt is from one of her interviews.

"I dated a few guys who really loved big boobs, so they were really happy and wouldn't stop touching them, and I've dated guys who just didn't care. I don't know what's more annoying, guys who won't stop touching them when I'm trying to watch TV or guys who don't care about them. I need a happy medium. My ex would touch my nipples all the time and I was like, 'I'm trying to watch The Real Housewives and you're touching my fucking nipples right now. It's annoying.' Don't touch my nipples while I'm watching Bravo."

Her comments about getting dick pics in her emails and on Twitter are also hilarious.

Last I knew, Jenna was a make-up artist on adult video sets, a job she enjoys very much, although the guys hit on her all the time. They can't help it.