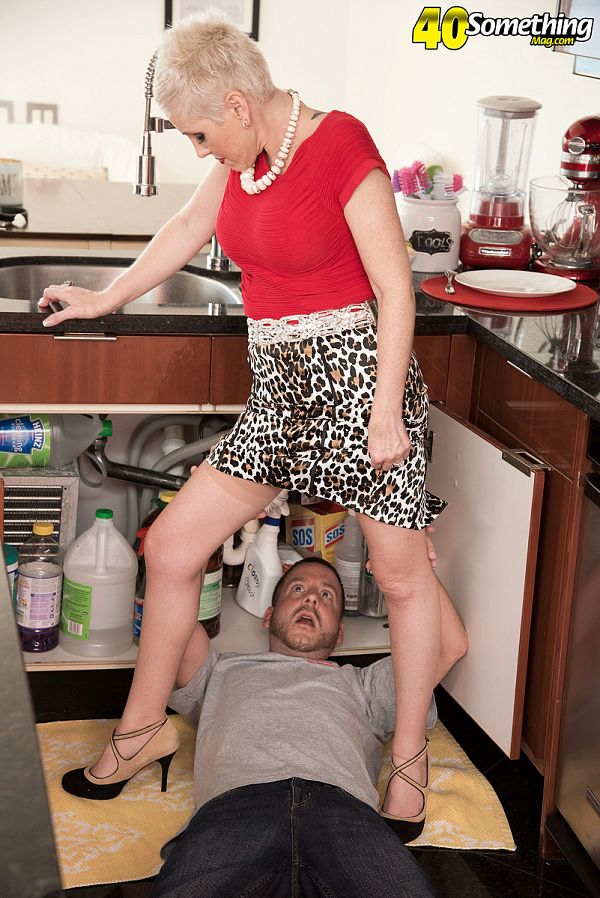 In her first scene at 40SomethingMag.com, 43-year-old Kimber Phoenix fucks the plumber and gets caught by her husband. Now, you'd think that would create some marital difficulty. When Mr. Phoenix walks in and catches his wife with the plumber's cock in her mouth, you'd think the action would stop right there. The plumber would get fired or shot. The pipes (the metal ones and the plumber's) would remain clogged.

Now, you might be wondering, "What kind of woman does such a thing?"

"I was doing a fetish shoot with Sally in Naples," said Kimber, who was born in Ohio but lives on Florida's Gulf Coast. "She mentioned to me that you were always looking for new, talented models, so I decided to take the leap and see what came of it."

Yes, Kimber is a fetish model. In fact, she's proud to say that she's the official fetish model for 2016 fetish convention in St. Petersburg, Florida.

Despite this, Kimber told us that her family would be "totally shocked" to see her here. "But my close friends would assume that I was once again doing what I want to do, just not what people expect."

And she brought along her husband to watch her get fucked by total strangers. Now that's a wife!