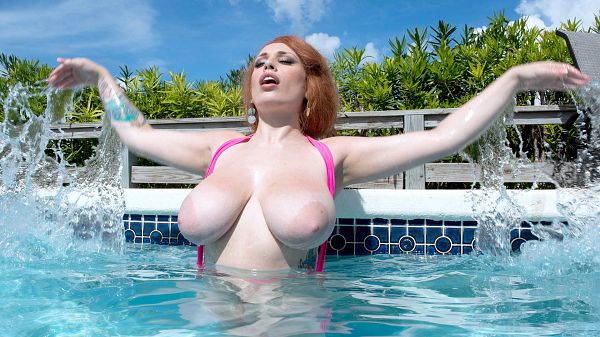 This scene of beautiful British redhead Lily Madison was shot in Eleuthera, the Bahamas, one of my favorite places in the world. Eleuthera has gorgeous white-sand beaches and not a lot of people, so it was easy for us to find private locations for Lily to show off her big, natural tits and shaved pussy. Just about anywhere else in the world, you might be concerned about passers-by, but let me tell you, you could spend a week on a beach in Eleuthera and not see a single person.

Here, Lily Madison models a few skimpy bikinis at poolside. As Elliot wrote, "If this happened near any populated areas, Lily would attract huge crowds, and that could potentially lead to rioting."

The first bikini doesn't begin to cover her wide areolae. The second bikini has fringes like a stripper might wear. This one also fails to cover her areolae. Notice a trend here? Finally, Lily sheds the bikinis, which weren't doing much, anyway, and gets into the pool and uses her fingers to satisfy her pussy.

Lily used to be a photographer.

"I was always on the other side of the camera, and I thought, 'I'm too short to do modeling,'" she said. "I didn't think I'd ever get any work as a model, and then with the webcam modeling, everyone said I should be in guys' magazines.

"My friend found some websites, and we were like, 'You can get paid for sitting around and taking your top off?' We didn't believe it. We were young and didn't know about these things, and then we started doing it and found out that people would pay money for it, and it went from there."

I'd pay anything to see Lily naked. She's one of the sexiest girls I've ever seen. Years after her time in Eleuthera, Lily did her hottest scenes ever, a pair of girl-girls with the great Japanese natural Hitomi. I'd love to see Hitomi and Lily together in Eleuthera one day.