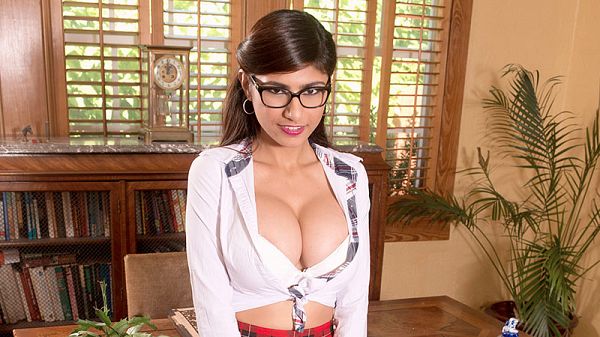 Dressed up as a student, Mia Khalifa, whom I'm proud to say I discovered, deep-throats and fucks Tony's cock. Lucky guy. This was Mia's second fuck scene ever and was shot before she gained so much publicity and, in some cases, notoriety, although in my opinion, that word doesn't fit. Everything Mia did was good, and the things she did with us, like this scene, were great because she was new and fresh to the scene.

Mia moved from Florida to Texas, trolled college and sports athletes on the Web and became a sports commentator. I believe she still has her own webcam.

Here are some excerpts from one of two interviews I did with Mia. I gotta say, it felt odd to see the girl who used to take my order at the burger joint sucking cock, but it was a very good kind of odd. And by the way, that burger joint in Miami wasn't Whataburger, despite urban myths to the contrary. Miami doesn't have a Whataburger.

MIA: You know how they knew? As soon as my stuff at SCORELAND went live, someone made a fake Instagram of [me], and they friend-requested everyone that I followed, including my family members.

SCORELAND: That's pretty mean. If people weren't so mean, this would all be fine.

SCORELAND: How about the good side. The best part about this has been...

SCORELAND: Do you look different?

MIA: I look a lot different. I weigh 60 pounds less and I have giant tits now. Some guy Tweeted, "Hey, she asked me to prom freshman year!" And I was like, "Yeah, but you said, 'No.' Do you regret that now?"[Laughs]