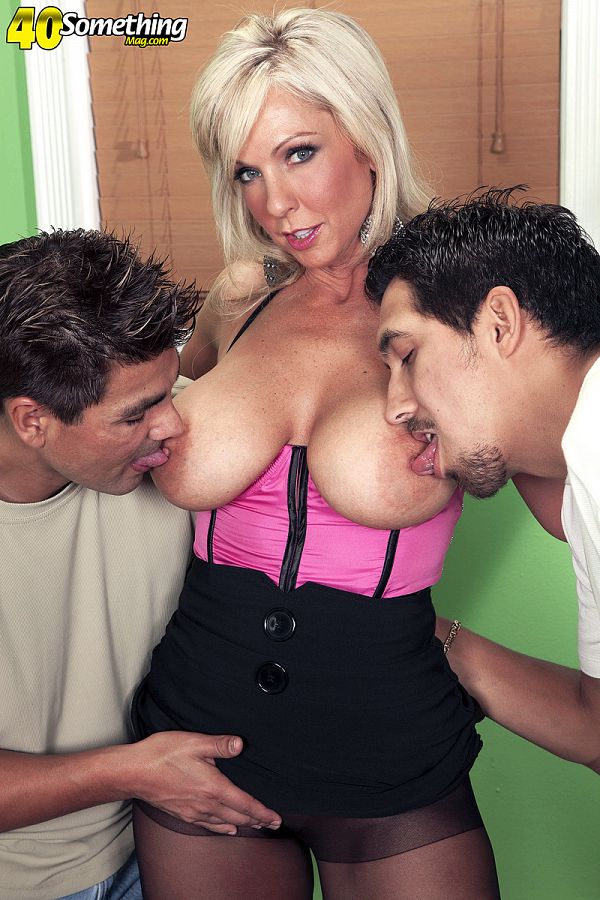 Here's a scene of Naughty Alysha that's never made it to 40SomethingMag.com. It was shot for SCORELAND, but it shows off everything that has made Alysha not only a great 40SomethingMag.com model but also one of the hottest, sexiest and raunchiest MILFs ever.

Alysha sits on a couch with Sergio and Juan. The two guys suck on her tits, one boob to each man. Alysha wants cocks in her face, so they drop their pants, and she goes for the double blow and hand job. Sergio eats Alysha's cunt while she blows Largo. Then they take turns fucking her, and when one is in her pussy, the other is in her mouth. Finally, they shoot their loads all over her pretty face.

Her husband, for instance, does not have a huge cock. He has a normal-sized dick, but he satisfies her all the time, Alysha said. Of course, that doesn't stop Alysha from fucking a lot of other men, too, including her fans and random guys she encounters in sex shops and adult theaters (yeah, they still have those, and the ones Alysha goes to are raunchy).

We love her idea of shy.

See More of Alysha at 40SOMETHINGMAG.COM!