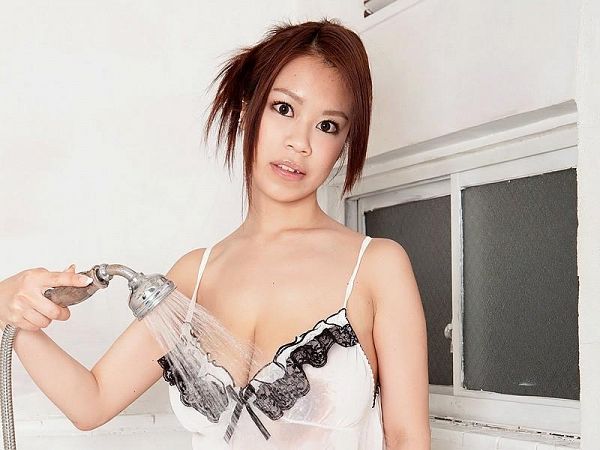 In Japan, Ria Sakuragi became a well-known name in the big-boob community. She has oval-shaped, very dark brown areolae that circle her dark brown nipples. Ria's tits are very pliable and malleable. She can easily squish and squeeze them. SCORE was the only western magazine to publish Ria.

"There are more big-boobed girls in Japan than westerners realize," Ria said via a translator. "I know many more. Hitomi is my friend and I saw her SCORE pictures. I am happy to be in SCORE, too, my first western magazine."

Since Ria couldn't get to the States, SCORE had her photographed in Japan. Like most Japanese girls, Ria lives on her smartphone and spends a lot of time on the Net. She likes to shop, go to spas and surf the Web, just like most hot chicks. They all seem to do the same things no matter what nationality they are. Shop, spend hours on the phone, dote on little dogs and dress in tight, skimpy clothes to excite guys.

One thing I noticed about most Japanese female models: They don't have tattoos. At least the ones I've seen. American and European nude models are increasingly getting covered in them. It's a very complex and lengthy subject with deep roots in Japanese history. Tattoos are generally frowned upon by mainstream Japanese society these days, from what I'm told, unlike in the States and Europe where they're considered hip and cool.