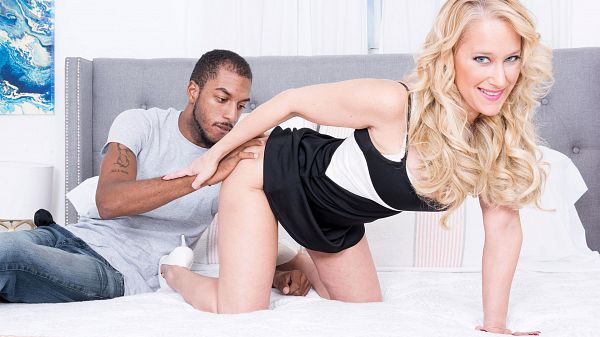 When this video opens, 46-year-old Tabatha Jordan is doing a sexy dance for us. She's touching herself, and she looks like she's ready for action. Well, she is. She shows off her ass then pulls aside her panties so we can see her pussy and asshole. Next thing we know, she's lying in bed with her legs spread, and the view is first to her panties and then to her pretty face.

"I had never had the chance, but I really wanted to shoot with a black guy, which has been a fantasy of mine for a really, really long time," Tabatha tells us. "And as it turns out, he's here."

Tabatha, who lives in Florida, was a SCORE magazine model and feature dancer in the '90s and early 2000s. Back then she went by the name Haley Hills. She took a break to get married and have a kid. She worked in business administration and finance. And now she's back doing what she loves best...what she was born to do.

Tabatha describers herself and her husband as open-minded. They're not swingers, but he's watched her have sex with other men. They'll definitely have sex while watching this scene. It's an inspiration.