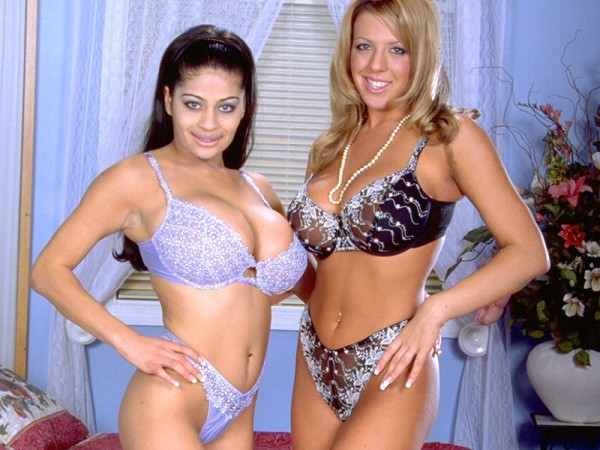 Two busty beauties who debuted in the July 2000 issue of SCORE were both set to sail on the 2000 Boob Cruise when we got them together for what would become a historic girl-girl, the only encounter of two of the prettiest girls in SCORE history.

Born in Afghanistan, Ariana was discovered by the same guy who found Florida co-ed Carrie Lynn. Ariana would be the covergirl of that July 2000 issue, narrowly edging out Adina. Ariana was 20 years old at the time and sported E-cup tits on a mere 112-pound frame. That's impressive. She was a house dancer at a club in Los Angeles, California when we found her, and it's safe to say that she could have had a lucrative career in porn if she had wanted one. But she didn't want one. Ariana did a few girl-girls (another was with Tanya Danielle) but never went all-the-way on-camera.

Adina did go all-the-way, several times. She was 20 when we found her and living in Las Vegas, Nevada. Now, this was 2000, so when Adina told us she found us on the Internet, that was a bit unusual. We're talking way before the era of Facebook and Twitter. Nowadays, it seems as if every girl comes to SCORE through social media. Back then? Not many.

As for her scene with Ariana, Adina said, "She was cool. Usually I am attracted to tan, hard blondes, but Ariana is beautiful." Then she added. "This wasn't my first time with another girl."

Indeed, Adina hung out a lot with tan, hard blonde Tanya Danielle on the Boob Cruise while Ariana practiced entrancing every guy on the ship. It was child's play for her.

As was the case with Ariana, modeling was sadly a brief fling for Adina, who was studying to be a dental hygienist when she found us (how come so many hot girls are dental hygienists and nurses?). Adina never did become a dental hygienist but she studied for the certification on the Boob Cruise when she could, bringing her text book along for the ride.

Elliot James wrote of this scene, "The build-up and the anticipation add to the jackin' fun of this oily massage session. When they get down to the sexin', totally nude down to bare feet, that massage table gets too tight so they move to a bed in the next room where they can stretch out and spread open! Pierced pussies and big tits get plenty of attention. Adina and Ariana get so worked up, they need something hard and long so Adina gets her bag of tricks and pulls out a double-headed twat-toy and a strap-on rubber cock. The fucking begins!"

See More of Adina at SCORELAND2.COM!