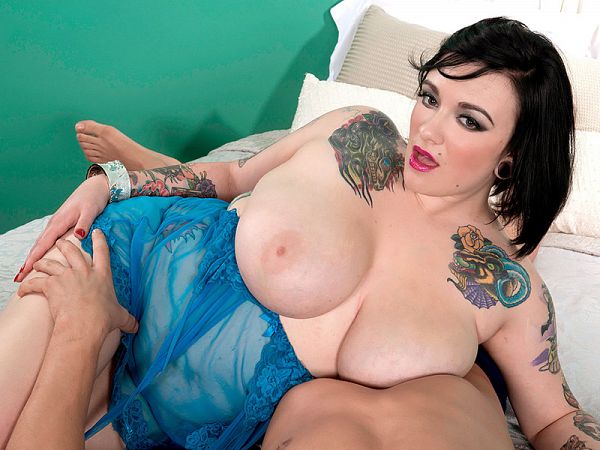 A gorgeous alternative model, huge-breasted, heavily-tattooed Scarlet LaVey was on the voluptuously thick side when she came to SCORELAND and XL Girls. She's married. Her husband picked her modeling last name.

"When guys stare at my boobs or say something to me about them, I actually like to pretend sometimes that I am pissed off about it, but it is all part of the act. I love it," Scarlet said in a chat with a Voluptuous editor.

Besides the solos and hardcore shoots we did with Scarlet, she did some cool bonus videos at SCORELAND. One is called "Tattoo Exploration." She describes her tats as the camera roams her body. There was also a panty stuffing video with Angel DeLuca in the models' dressing room. This is a fetish Angel is into. As Scarlet watched, Angel stuffed a pair of panties all the way in her pussy and pulled it out.